WHEN YOU’RE STUCK ON A SANDBANK 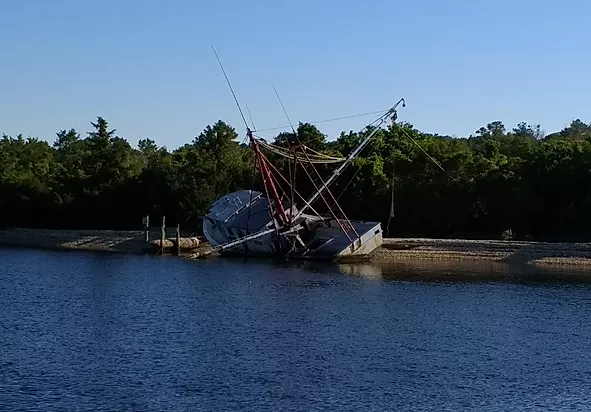 WHEN YOU’RE STUCK ON A SANDBANK

The day had started as normal. For a traveling day, that is.

Coffee (two cups please); pups taken care of and settled up on the fly bridge for the trip; lines ready to cast off; Donna Bag (she gave it to me) packed and checked as follows:

One hour of calm in the Neuse River was followed by two foot waves in the Pamlico Sound and a seasick dog. All this happiness occurred en route to Ocracoke in the Outer Banks of North Carolina.

It was too rough to go down from the fly bridge and get something to eat or drink and at that moment my Kindle decided to die, compounding the misery. Out came my notebook and I was in the middle of some profound thought (now lost forever) when a thunderous “thump” resounded.

I swore. Emphatically. Loud noises on a boat are bad news. I believe I probably used the S-bomb followed by even better stuff.

Down the stairs I went to the aft deck and even further down to the swim platform. I stared down into grey, murky, swirling water. We were stuck, firmly, on a sandbank.

Two 735 HP engines could not get us of that sandbank. And it was high tide. Also, we were well inside the markers. Thus, a case of –

The Captain got busy. Ocracoke, where we were heading, couldn’t help us. Boat U.S. out of Cape Hatteras could but wouldn’t be there for 1 ½ hours.

That shoal wasn’t supposed to be there! It wasn’t marked on our chart or in the “infallible” website info we follow.

A few tries with those mighty engines made it worse. The Captain turned off everything and we settled in to wait, in silence (!) for the tow boat.

Then, gently, ever so gently but persistently the waves started pushing us sideways as the wind changed direction. A 65K boat was no match for those insistent, repetitive nudges.

It did not take long and we were floating free of the sandbank and no longer in need of a towboat.

So the question arises:

If you’ve been flying through life powered by adrenalin, throttle full open, the perceived need for more money, a better job, a new car, an expensive vacation or whatever it is “you have to have,” don’t be surprised if God strands you on a sandbank.

I read somewhere that always, God is a gentleman. He never forces His way in. He nudges, He comes in the quiet, He speaks in a still small voice.

So I figure, if I’m stuck on that sandbank of life, maybe it’s time to listen for His voice.

Cyber Hugs my friends and many blessings, wherever you are.