By the mid-forties the One Room School house had all but disappeared in South Africa. Farms were big, roads were terrible and there were less children.

My siblings had attended such a little school house until the age of twelve at which time they were shipped off to town and boarding school. I was a change of life baby and lucked out. The schoolhouse was no more but my aunt, on the adjacent farm, was a former school teacher and her son and I were the same age. Imagine the fun. Summertime school was outside but come midwinter, two four year old kids sat on the floor in the kitchen in front of a huge old Aga coal fired stove learning their ABC’s and 1 2 3, etc.

Then, already I was a voracious reader and available children’s books in Afrikaans, my mother tongue, just didn’t satisfy me. Enter Noddy and Big Ears, a British Series by Enid Blyton. Noddy was/is a little gnome and Big Ears (the name says it all) his sidekick. Oh, the adventures we had! I read and understood English long before I could speak the language.

The sad part, which my five year old self didn’t understand, was that my much-loved little cousin, Timothy, did not share my love for reading and especially for Noddy. The pictures were fine, the reading not.

Timothy, you see, was Down’s syndrome and I guess it didn’t take long before the learning curve and abilities became more than my aunt could handle. Playing together was fine; learning was not.

I completed grades one and two in a year and was shipped off to the “big” school in grade three. 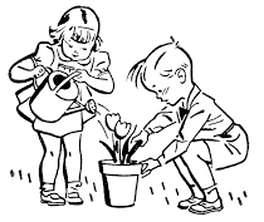