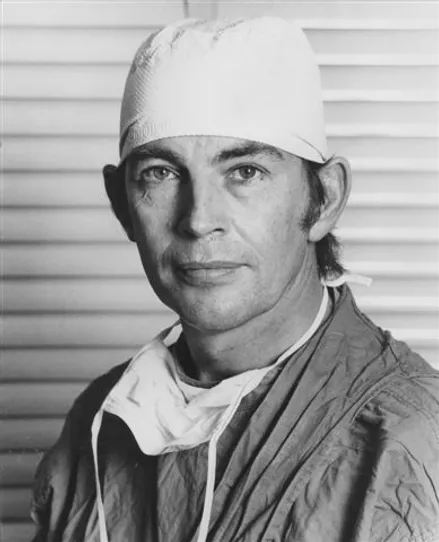 Dr. Barnard and his team, which included his brother Marius, performed a nine-hour operation and pushed the medical world into a new era.

The recipient, Mr. Louis Washansky could walk and even talk after the surgery. He lived eighteen days with his new heart but succumbed to pneumonia.

The donor of this heart was a young woman, Denise Darvall, who had been run over by a car the previous evening. Her father agreed to donate her heart and kidneys.

THE ROAD TO FAME DID NOT COME EASILY TO DR. BARNARD.

He was born in 1922 in Beaufort West. A town in the dry interior of South Africa. His father was a pastor in the Dutch Reformed Church and with three brothers, money was tight. But he was a good scholar and his family secured a scholarship for him to the University of Cape Town.

Money was not the only problem. Chris, a country boy, was Afrikaans mother tongue. He had to learn to express himself in English.

He graduated, moved to a small town and got married.

The seeds to his further career was sewn when a baby boy with a heart defect that couldn’t be repaired, died. He saw the need for valve replacement and remedial surgery.

The heart-lung machine was still too new and considered too dangerous to use in surgeries. Enter the USA and a chance to work in Minneapolis under Professor Wagensteen.

The heart lung machine was perfected and the way to open heart surgery lay clear.

Chris returned to South Africa with a new heart lung machine. A step closer to his dream. He continued to do research and study immunology in the States where immune-suppressive agents had been developed.

Dr Barnard had collected an impressive team around him for his groundbreaking work. http://www.cts.uct.ac.za/Historical/Transplant/Team

That theatre today is a museum in honor of those pioneers.

Dr Barnard’s private life did not survive his fame. His marriage crumbled.

Good looking, heart throb material and instant worldwide fame brought divorce from his wife Louwtjie in 1969. In 1970 he married beautiful and young Barbara Zoelner but the marriage ended in 1982. His third marriage to model Karen Setzkorn in 1988 also ended in divorce in 2000.

A sad lesson lies hidden in the story of that first heart transplant. D. Barnard was a brilliant surgeon, but the lure of the bright lights was too tempting.

At times he was a guest of Pete Sellers and allegedly had an affair with Sophia Loren.

Dr. Barnard developed arthritis in both hands and his days as a surgeon was over. But a new interest had grabbed this brilliant mind.

The Impossible Dream on How To Stay Young.

Dr Barnard died in Cyprus, Greece on September 2001 from an acute asthma attack.

And at this point I thought I’d put Dr. Chris Barnard, that pioneer of the first successful human heart transplant, to bed.

It was not to be. He spooked me. There was something I’d forgotten.

I had it autographed and gave the book to my mother as a birthday present. Those were heady days. We were proud South Africans!

There have been splits since. To me the most spectacular was King Henry VIII who broke from Rome because they wouldn’t let him divorce Catherine of Aragon.

His Majesty declared himself head of the church in 1534 and the Anglican Tradition was born.

The second and no less spectacular split from Rome came in 1517 with Martin Luther. He nailed his ninety-five theses on the door of the Castle Church in Wittenberg, Germany and The Reformation was born.

Since then it’s been interesting. I queried why the Anglican Church is called the Episcopal Church in the States.

I came across so many websites with so many answers and explanations that I settled for the simplest one.

After the War of Independence, not wanting anything to do with Mother England, Anglican was renamed Episcopal.

And discovered a branch of the Episcopal Church had gone back to calling themselves Anglican. https://www.gotquestions.org/Episcopalians.html

I gave up and reached for the wine bottle. Understandable, I’m sure.

I sometimes get the feeling that any real, perceived or downright stupid reason cause people to break away and start their own church.

Why can’t we all agree that we disagree on some issues but in the BIG PICTURE, we really are,

ONE BREAD ONE BODY.