The Poodle Who Fell Into Dark Waters 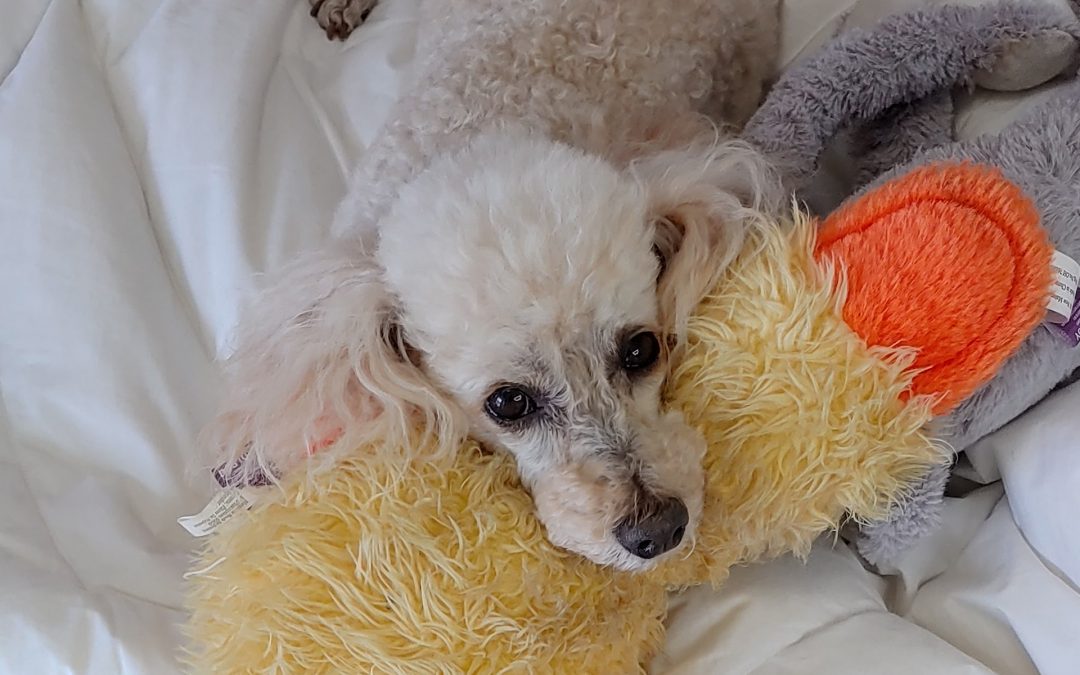 Our poodle likes walking on the edge of the dock

My past ranges from cringe-worthy incidents to other failures, successes, joy, and even tragedy. I do look back sometimes and reflect, especially the times I have fallen; I will never forget those who have pulled me back from deep and dark depths.

Let’s start with my poodle who fell in

In his defense, he’s twelve years old and has never been that smart. Super loving yes, smart, no.

Contrary to the myth that poodles don’t like kids, Louie, that’s him in the photo, adores little ones. He’ll ignore adult attention for a bit of rub from a pint-size human.

Also contradicting another myth about poodles, he loathes water. He has no choice about bathing and grooming, but swimming pools, lakes, and the ocean have no allure for this canine. He’d rather watch from a distance.

He has no sense of direction. He is not aware of his surroundings. He has no idea of where he is in space

Once on his lead, he goes. Eyes in the distance. Forward at speed, only detouring for a sniff and a pee. Despite that dislike of water, he walks through puddles rather than jumping or taking a detour. As I said, he has no sense of his place in space.

Now put said dog on a boat, and the situation turns fraught with “incidents.”

A dog on a mission

On the dock, he walks next to the edge. Precariously so. Those little goat feet prance along with an inch or two to spare between him and disaster. It doesn’t help to pull him back to the center. Oh no, our little man loves to live dangerously and tugs to get back to that edge. He hates for the lead to be shortened and locked, keeping him safe next to me.

So be it. Louie’s “brother,” fondly nicknamed Pumpkin on account of his round face, only moves when he absolutely must or when he sees a squirrel. He happily trots along behind me, lead at full length.

Thus, my modus operandi is Louie in front on the edge of the dock so I can watch, and Pumpkin behind me, sedately trotting along in the center that I can ignore for the most part.

As he did this one fine evening when my world was at peace, and I was tripping along, reminiscing on the lovely birthday dinner I’d just had.

I turned to find him, Pumpkin, that is, socializing with a couple seated on a bench at the start of the dock.

The poodle, Louie, still full speed ahead on the edge of the dock, also stopped, turned and his little hind paws only found air.

Having just returned from that birthday dinner, I was dressed in my new striped pants, white T-shirt, and pale pink wrap. The couple came running, and I threw Pumpkin’s lead at them, yelling, “please hold him!” while I flattened myself, birthday apparel and all, on the dirty dock and reached for my dog.

Two tries and I had him and held him close. To hell with my finery. This was my fur baby

My husband had appeared by then. “Why didn’t you just bend over and grab him by his harness?”

“My arms aren’t long enough for that maneuver.”

“Well, wait until he swims to the dock.”

What? And see him panic even more?

I took him back to the boat and wrapped him in a towel. I held him until he stopped shivering, rubbed him dry, and brought his favorite toy, the duck.

I wish I could say he learned something from this experience, but sadly he still pulls to walk at the edge of the dock. Dark water rippling below.

As I watch him, I can’t help but think of how similar we are as humans.

Why can’t we keep our eyes on the prize? Why do we insist on looking back at past failures and beat ourselves up” Why can’t we learn from it and move on?

That long-ago historic race in 1954 in Vancouver came to mind. The Press called it The Miracle Mile.

Roger Bannister from Britain and John Landy from Australia had both broken the four-minute mile. This time, these two athletes would compete against each other.

Landy was leading and then, for some unknown reason, turned his head to see where Bannister was. It was all the Englishman needed. He surged past the Australian.

Landy had forgotten to keep his eye on the prize. He had looked back.

From there, my mind took a flying leap to Lot’s wife. The Bible doesn’t even give the poor woman a name.

The city was burning. Smoke and flames and people screaming and trying to run from the disaster, and all she could do was look back at the life she had left behind? Probably thinking of her lovely home, and her clothes, and jewelry, and friends. Maybe she had a pedicure scheduled for that afternoon.

Jesus on looking back

Even Jesus had something to say about this looking back thing.

It will be just like this on the day the Son of Man is revealed. On that day no one who is on the housetop, with possessions inside, should go down to get them. Likewise, no one in the field should go back for anything. Remember Lot’s wife! (Luke 17: 30–32)

Brothers, I do not consider that I made it my own. But one thing I do: forgetting what lies behind and straining forward to what lies ahead, I press on toward the goal for the prize of the upward call of God in Christ Jesus (Phil 3:13–14).