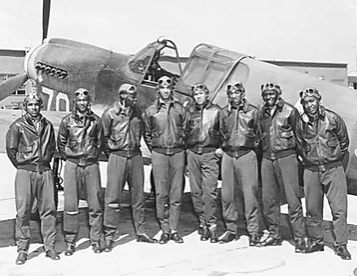 Hampton VA boasts an Air and Space Center well worth a visit. There are numerous

exhibits, an I-Max theater, a section dedicated to the development of flight (Kitty Hawk

and the Orville Brothers, Louis Bleriot etc.) and much more but I got stuck somewhere

between the Tuskegee Airmen Exhibit and the Crew of a Liberator, aka a B24, and not to

be confused with the B-17 or “Flying Fortress!”.

And there I spent my morning. The rest of the Center will to wait for a follow up visit next

interviews I listened to only involved one of the fighter squadrons. These young men had to

made it ranked amongst the best pilots there were. I read their stories, I watched the

DVD’s, an interview with one of the widows as well as a fascinating talk by the son of one

of the original airmen. And yes, I will now definitely order “Red Tails” from Netflix.

interactive system where you could listen to the various crew members, now elderly men,

who had served as crew.

The Liberator carried 10 crew. I listened to each one describe their duties, some of their

experiences and thought of Winston Churchill’s remark, “Never was so much owed by so

These were men in their late teens, early twenties when they served. Death was something

that happened to other people. As one remarked, ”we never said, ’good luck,’ “we’d say,

Thus implying that if they got shot down or had to land, it would be in a friendly place.

degrees below. Their clothing was electrically heated but if the heating system on the plane

failed, they were at 40 below with only their clothing to keep them warm.

If one could see any humor in the situation it would be the story the radio operator told.

They had to wear these very thick gloves which mean it was slow going when transmitting.

The Navy guys transmitted at four times the speed of the Liberator operator. To quote,

“we banged out the letters!”

followed by another group (can’t remember who) offering them a “ nip or two.”

The pilot explained the danger of flak (anti-aircraft fire).They could not break formation

or take any evasive action so either they were lucky and got through or they did not.

The last interview I listened to was that of the tail gunner. He was 18 when he joined but

lbs but at 125 lbs he didn’t have a problem.) It was bitterly cold and it was lonely. He was

truly on his own.

left was shot down and then the one to his right. This was it, he thought to himself, his time

had come. But then two Tuskegee Mustangs appeared, took care of their attackers,

escorted them to safety, then waved and peeled off. He never saw them again, didn’t know

who they were but knew he owed them his life.

United we stand, divided we fall…….

But he says, that night when you went into your hut you had to face those empty bunks.

I’d hugged my marine that morning, this museum visit was later the same day. I’m still

internalizing all that I saw and heard.