STUCK IN A MANGROVE BUSH 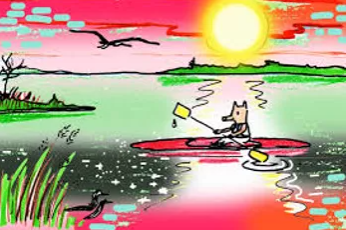 STUCK IN A MANGROVE BUSH

#1 in The “Chronicles” of The Blue Goose.

(There will be a prequel to this, how the Blue Goose got its name.)

The Blue Goose, that is my beautiful blue Hobie Mirage kayak, has pedals. It also has a paddle which I use as little as possible. The rudder sits at the back and I have a nifty little lever with which I steer. I can go to the right or to the left but I can’t go backwards.

On this specific day I got sidetracked by a pelican posing on a piling and following my every move way down below in his territory. His beady little eyes pinned me down, his head moving rhythmically from side to side as the Blue Goose and I rode the swells. I got a few good pictures, realized I’d drifted closer to land and the red mangroves growing in the water and pushing the lever to the right, pedaled furiously. But it was too little too late.

I gave up, sat back, and waited to drift into the mangroves. And there I was, firmly stuck in the middle of the mangroves with thankfully no-one around to witness my folly. I grabbed the paddle and pushing and shoving (the water is shallow where the trees grow,) propelled backwards. Pedaling away to open waters, I sent up a small prayer of thanks. For not getting hurt; for not damaging the Blue Goose; and mainly for not needing to call for help. Yup, my phone goes where I go, otherwise how would I get those beautiful photos?

Then, out there in the Gulf of Mexico, the vision came to mind of a ram stuck in a bramble bush, thus saving Abraham from sacrificing his son. The Bible doesn’t specify but uses the word “thicket.” But my mind insisted that it was a bramble bush?  I decided to check Websters and consider myself vindicated. That Biblical thicket could have been a bramble bush!

With that bit of nonsense out of the way (I couldn’t resist!) my mind went back to Abraham and the faith of this Biblical Patriarch.

First, God tells him to pack up and go, not telling him specifics, just a land He would show him, or how long it would take. (Genesis 12:1)

Next, God tells him he will father a son by Sarah. (He already had Ishmael, born to Sarah’s handmaiden.) And that one day his offspring would be numerous. (Gen 17:16) Now remember, by this time Abraham was 99 years old and Sarah 90 years. But Abraham believed and Isaac was born.

After all this, God asks him to offer that long-awaited precious boy as a human sacrifice? (Gen 22:2) Abraham actually obeyed and set off to do the deed? And if it hadn’t been for that ram stuck in the “bramble” bush he would have gone through with it? Give me a break!

This was big, no, this was super-size and here’s where I would’ve thrown an old-fashioned super-sized hissy fit. Surely Lord, surely I didn’t hear correctly.

He is not asking you to offer your child. He might be asking you to give up (pick whatever applies)  your friends (or “that” specific friend); your lifestyle (or changes to “that” lifestyle); or going to “that” club; or changing the music you listen to or the books you read or, or horror of horrors – water cooler gossip.

But back to Abraham, listening and obeying. His offspring did become like the “stars of the heavens and as the sand which is on the seashore.”  (Gen 22:17) Okay, he did have a few more wives after Sarah passed away but still…) and he lived to be 175 and was buried with his forefathers.

The lesson I’d like to share? The one I took away from getting stuck in that mangrove bush which led me to thinking about Abraham and Isaac? It’s a challenge, I know, but try to listen to that small voice and what God is asking you to offer up or change. Then obey. You’d be amazed at the blessings that will follow.

Today, I end with a song by one of my favorite Arabic Christian groups. Enjoy.