No surprise there. I’m always reading a book. Or two. Or three. At the same time.

A quick survey shows two Bibles and two devotionals. These are permanent fixtures so I guess they don’t count.

Within easy reach is:

I can’t read any of the above cover to cover. It’s like a wine tasting. I read a little, then go back to it after savoring the after-taste. Thus I’m reading in one or the other at any given time.

Now “Bruno” is another matter. Start to finish when I get it into my hands.

While waiting for the next “Bruno,” due out in June, I opened a Christmas present.

A book by Ted Dekker. An author unknown to me. And found myself transported to the year, also the title of the book,

Spellbound from the first page, I followed Maviah, the protagonist.

Born illegitimate, sold into slavery, returning to her Banu-Kalb tribe of proud Arabs, witnessing the murder of her son, crossing the Nafud desert, meeting and outwitting Herod Antipas and, wait for it,

As the author preferred to call Jesus.

Nosy as always, I went researching.

Yes, there had been a mighty Banu Kalb tribe. And one of their main cities had been Dumat. An oasis situated at the northern limit of that might Nafud desert.

There had been a Nabatean tribe whose mighty king was Aretas.

Herod Antipas divorced her to marry his brother Philip’s wife, Herodias. Yes, that Herodias who had poor old John the Baptist beheaded.

Daddy Aretas did not take kindly to his daughter being ousted and waged war on Herod Antipas. And destroyed Herod’s army.

Maviah went on to become a warrior queen of the semi-nomadic Arab tribe. And, it would appear, Christianized her tribe.

I shook my head as I realized how little I really know. The fact that the real Maviah lived more than 300 years later did not detract from the story cleverly woven around both fact and fiction.

The Bookworm in me glowed in delight.

And I thanked the patron saint of writing, Saint Francis de Sales for all these wonderful writers. Bringing worlds to life that I otherwise would not have bothered to explore.

I do hope my fellow bookworms are dashing out to buy AD 30.

In the meantime I discovered a follow-up had been written.

It arrived in the mail today. It’s on my top bookshelf. Waiting for me. 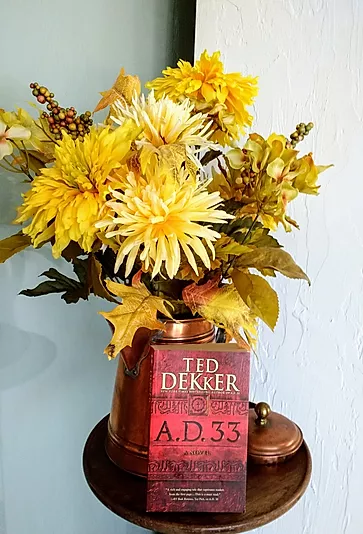