I’M IN IT FOR THE LONG HAUL 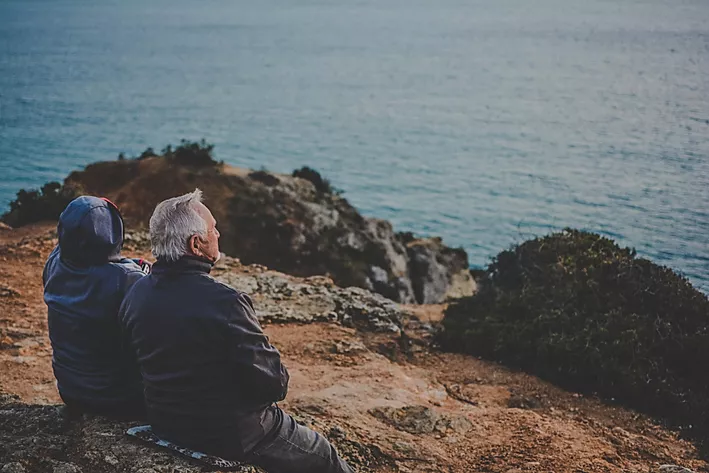 I’M IN IT FOR THE LONG HAUL

We were having lunch with good friend we only see once or twice a year.

The someone mentioned the R word.

“Yes,” my friend said. “Retirement is not easy.”

We all laughed. A little uncomfortably. At the truth in that statement.

I look back on my own. Second time around.

I look back on those of close friends.

I remember. As they do.

Maybe no kids but both of you working. Interesting days. Watercooler talk to bring home and discuss and share and laugh about.

You’ve weathered it all. You’re still together. Busy. Active.

There’s always something to talk about.

Suddenly you and the person you promised to love, honor and obey till death you do part, are together.

You are unprepared. You had absolutely no idea how hard it would be. And now it is here. You are living the “dream.”

Nothing new to talk about.

Politics and Religion unless –

We all have quirks and habits. Age magnifies those.

What was cute fifty years ago is no longer cute.

A habit that was funny because you only were exposed to it now and then, now drives you up the wall.

Because you are together, joined at the hip, twenty-four seven.

Things are said that can’t be unsaid.

Unkind thoughts are as bad as unkind words.

No, retirement is not easy.

It’s back to that “give and take” thing.

Looking for the best.

Realizing that for every time he irritated you, you probably irritated him twice as much.

Within you is a well of strength. Draw on it.

“What will survive of us is love.”

And there’s Someone who is in this marriage with you for the long haul.

Who loves you with a perfect love.

Photo by Katarzyna Grabowska on Unsplash

Side by side, their faces blurred,
The earl and countess lie in stone,
Their proper habits vaguely shown
As jointed armour, stiffened pleat,
And that faint hint of the absurd—
The little dogs under their feet.

Such plainness of the pre-baroque
Hardly involves the eye, until
It meets his left-hand gauntlet, still
Clasped empty in the other; and
One sees, with a sharp tender shock,
His hand withdrawn, holding her hand.

They would not think to lie so long.
Such faithfulness in effigy
Was just a detail friends would see:
A sculptor’s sweet commissioned grace
Thrown off in helping to prolong
The Latin names around the base.

They would not guess how early in
Their supine stationary voyage
The air would change to soundless damage,
Turn the old tenantry away;
How soon succeeding eyes begin
To look, not read. Rigidly they

Persisted, linked, through lengths and breadths
Of time. Snow fell, undated. Light
Each summer thronged the glass. A bright
Litter of birdcalls strewed the same
Bone-riddled ground. And up the paths
The endless altered people came,

Washing at their identity.
Now, helpless in the hollow of
An unarmorial age, a trough
Of smoke in slow suspended skeins
Above their scrap of history,
Only an attitude remains:

Time has transfigured them into
Untruth. The stone fidelity
They hardly meant has come to be
Their final blazon, and to prove
Our almost-instinct almost true:
What will survive of us is love.