CHESTERTOWN, MY KIND OF TOWN

CHESTERTOWN, MY KIND OF TOWN

It was the first day of a 4-day trip away from our “summer home,” aka Calvert Marina, Solomons MD. After docking Steve has his duties and I have mine, potty break for dogs.

At the first cross street a door opened in one of those quaint houses that abound and an elderly bichon lady (I later discovered that she was 13) limped down the steps followed by an attractive owner, red jacket, white pants.

King Louie IV is a jumper so I quickly shortened his lead. But he showed no interest in the owner’s pristine white slacks (his normal target, much to my chagrin), being totally enchanted by the tiny woolly mammoth within his reach. She graciously allowed his sniffing and he was soon joined by Mikhail B, he who is named for

“THE” Mikhail B. (Another story there.)

The ice was broken and it was easy to ask for a hug, even though I was sweaty after 4 hours on the boat. I did apologize!

We chatted, of course, and parted ways. 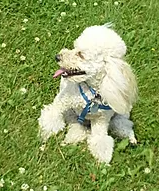