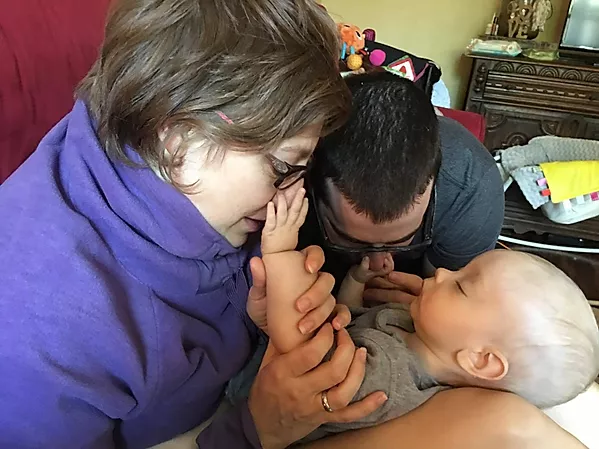 Join me in wishing young Master Oliver Edward Moravick a grace-filled and beautiful 1st birthday! His guest of honor was a lovely young woman, one Stephanie Ann Adams, I have it on the very best authority that these two whooped it up yesterday, Sunday March 12th, while the angels looked on indulgently.

The world lost Oliver on October 30th of last year. This brave little boy had survived a 10 hour resection surgery to remove a tumor from his cerebellum only to succumb to a rare and aggressive cancer.

Was his young life wasted? Absolutely not. His tiny footprints are firmly embedded in the lives of those he touched and the lessons he taught through his living and dying. His heritage? The ever-strengthening bond between his parents; the community of people who held up and supported them; friends they otherwise never would’ve met.

Stephanie left us 14 years ago today, March 13th, 2003. Steph was in the wrong place at the wrong time when a bullet cut short her life as she ran to help a friend.

We as parents mourn and miss them but know they are in a place where there are no tears and no pain. And so we celebrate their lives. Don’t tip toe around us, they came and lived as preordained.  “The days allotted to me had all been recorded in your book before any of them ever began.” (HCSB Psalm 139:16)

Do not stand by my grave and weep…

I am not there.

I do not sleep.

I am a thousand winds that blow.

I am a diamond glint on snow.

I am the sunlight on ripened grain.

I am the gentle autumn rain.

When you awake in the morning hush,

I am the swift up flinging rush

of quiet birds in circling flight.

I am the soft star shine at night.

Do not stand by my grave and cry …

I am not there.

I did not die.

I live with the Risen Lord.