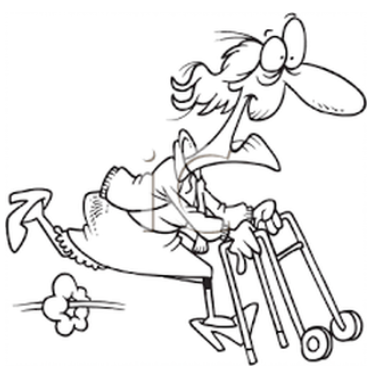 This one is for all the mothers and grandmothers who still read to the wee ones at bedtime.

Benjamin clutched his new skateboard and stared across the road at Mrs. McCaw’s long, sloping driveway. It was perfect for skateboarding, not flat like his driveway. It was also out of bounds. Mom did not like him crossing the busy road late afternoon when people were coming home, but Mom was having tea with the neighbor and Mrs. McCaw had rattled off somewhere in her ancient little car.

Mrs. McCaw was a witch. Benjamin KNEW she was a witch. He’d seen her one night, carrying two large green frogs. If she caught him, he’d end up in her stew as well.

“You’re a wimp”, he told himself. Be brave! Taking a deep breath, he looked left, right, left and ran across the street.

Benjamin was whizzing down the drive for the fifteenth time when he heard “clank-rattle-clank.” Mrs. McCaw!

Benjamin jumped clear of the skateboard and scrambled for cover behind a bush.

His new skateboard sped on without him. He shut his eyes tightly.

“Screeeeecch!” went the brakes. Slowly he opened one eye. Mrs. McCaw got out of her car and picked up the skateboard.

Benjamin crouched down low. If witches could really smell children, he was in big trouble. Mrs. McCaw looked around and sniffed the air. Her large nostrils quivered.

She got back into her car, carrying the skateboard. The garage doors opened, then shut with a “doiiiing!”

Benjamin went home. No way could he go and ask her for his skateboard. She’d turn him into a mouse and feed him to her cat.

At the dinner table Benjamin was very quiet.

“Are you feeling sick, Benjamin?” his mother asked.

Benjamin could not look at his mother. “I have a headache,” he said. “I’m going to bed.”

His mom came to tuck him in, but Benjamin couldn’t sleep. He climbed onto the windowsill and stared at the house across the road.

Suddenly the front door opened. Dressed in her baggy gardening clothes Mrs. McCaw came trotting out, his skateboard under her arm. Benjamin rubbed his eyes and watched open-mouthed as she put down the skateboard, jumped on and with a wild “yee-hah” whistled down the driveway.

She went awfully fast and he watched in horror as she missed the mailbox by inches, and disappeared into a large bed of tall white daisies.

Benjamin rushed downstairs. Luckily his parents were in the kitchen chatting. Flinging open the door he dashed across the road.

A loud disgusted snort came from the flattened daisy bed.

Benjamin craned his neck to peep behind the bushes.

Mrs. McCaw sat under the streetlight amongst the crushed flowers. Her glasses dangled from one ear, a few daisies were stuck in her wispy gray hair and there was a large brown smudge on her nose.

Benjamin swallowed. She didn’t look like a witch; she looked like a little old lady who’d taken a nasty fall.

He took a step forward and with a shaky hand fixed her glasses. She blinked and glared at him.

Benjamin snapped his jaws together so quickly his teeth clicked. “Where did you learn to skateboard?” he asked in a squeaky voice.

Mrs. McCaw brushed the dirt from her clothes.

“Skateboard? Child, I used to slide down the muddy walls of the dam on my father’s farm on pieces of aluminum roofing.”

Benjamin thought for a moment. “Uh, were there frogs in the dam?”

Mrs. McCaw grinned. “Yes. Large slimy green ones with warts. We caught them.”

Benjamin took a step back. “Like the ones in your garden here?”

Mrs. McCaw laughed so hard her glasses steamed up. “Don’t worry. They’re not meant for my cooking pot, but for the fenced-in pond behind my house. I save frogs. They get squashed crossing the road. But what were you doing on my driveway?”

“Well, uh-uh…” Benjamin buried his big toe in the mud. “You have such a nice steep driveway and ours…”

“Say no more,” Mrs. McCaw said. “I’ll make a deal with you. If you help me fix this flower bed and if your mother agrees, you can practice in my driveway as much as you like.  Now help me up.”

Benjamin bent over and took her hand.

“If you teach me to skateboard, you can help me rescue the frogs.”