BEING A CHRISTIAN IS LIKE BEING ON A DIET. 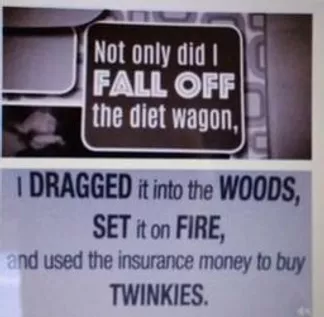 BEING A CHRISTIAN IS LIKE BEING ON A DIET.

Thanks to my friend Wikipedia (which we all know should be approached with care); this is a short list of diets available.

However, if diet and health and nutrition is your thing, go have a look. I don’t think Wikipedia is too far wrong on this one.

In the span of a long and often misguided life, I’ve been through some of these. Only a few has the honor of remaining in my memory.

THE CABBAGE SOUP DIET. (I was so hungry I nearly ate the lid of the saucepan.)

TWO VIENNA SAUSAGES A MEAL = six Vienna Sausages a day. (My own diet.) It had a lovely yo-yo result.

NOT EATING AT ALL. (Damn nearly got me hooked on appetite suppressants.)

WEIGHT WATCHERS. It worked and I kept off the weight.

So the question arises – why didn’t I try WW right out of the gate?

Because it was boring; because it would take time; because it meant changing a bunch of things like what I ate, how much I ate of it, even what time of the day I ate. And horrors upon horrors – I was being held accountable and had to get weighed once a week.

Oh yes, and exercise. That I didn’t mind. I was doing it anyway. I just needed to do more of it. Or so I thought.

It didn’t work. Obviously not. A couple of near catastrophes later I was totally fed up with those last seven pounds clinging to my fast disappearing waistline. Middle age does that to you.

Your lats slither on to your obliques, grab hold of your QL and then reach for your gluts. (Not quite but you get the idea….) Then there’s that opaque white stuff gluing the whole mess together. You end up looking square between your arm pits and your hips bones. (For those of you to whom this is double gobble-di-gook, check out the muscles of the back and hips on Google.)

Enter boring old Weight Watchers. And a buddy. (Hi Kathy!) It became fun. A challenge. And not at all hard to do.

But I had to get motivated.

I had to get to the point where I’d tried everything else before admitting defeat. My most spectacular failure came with the thought –

“I can still eat what I want as long as I exercise more.”

Guess what. Not true. You are what you eat. Sad, isn’t it? Says the Queen of Krispy Kreme donuts and Almond Joy (dark chocolate please) as she reaches for a carrot stick or a cucumber slice.

Let’s now move on to the Christianity thing. And if you think being a Christian cramps your style, take a peek at Exodus in the Old Testament.

Those poor Israelites. Rules. Regulations. Laws. Discipline.  And to crown it all, they couldn’t even address God directly!

Exodus 20:10. And they said unto Moses, “Speak thou with us and we will hear; but let not God speak with us, lest we die.”

Well thank heavens I do not have that problem. I have a hotline direct upstairs.

31 And the second is like, namely this, Thou shalt love thy neighbour as thyself. There is none other commandment greater than these.”

Then why, oh why, for the love of puppy dogs and cute kittens do we persist in trying every alternative method under the sun and some not under the sun before we obey these two simple commandments?

After the First World War someone coined the phrase, “There are no atheists in a foxhole.”

Yup, think of all the foxholes you’ve been in. Self-inflicted or not. And how fervently and genuinely you prayed. And God helped. But once the bullets stopped flying, you went right back to your old ways. (Sounds a little that Cabbage Soup Diet to me.)

But sometimes you remember that bargain you struck in the foxhole (BTW bargaining with God is always a bad idea) and you keep your promise. For a while. Then it Yo-Yo’s out of control again. (That 2×3 Vienna Sausages Diet, methinks.)

And here come the stupidest one of the lot. You don’t need God at all. You never call on Him. Not even when you’re in the foxhole. But you grab a drink or a pill to relax you and then it really doesn’t matter because you don’t care. Oh yes and yes and yes. (That’s the Starvation Diet with the appetite suppressants.)

So let’s take a look at this Christianity thing with a Weight Watchers mindset.

It’s tough at the start. It will take time. You will have to change a bunch of things.

Realize that the person holding you accountable gave his life so you may have life.

So try not to be found too light. (In this case.)

And exercise. Your brain. Get to know Scripture. It’s fascinating stuff.

I truly believe this is where most of us fall of the wagon. And that’s okay. Don’t voice it. Don’t Twitter it. Don’t put it on Facebook. Or Instagram.

Clean up those thoughts. It’s like getting rid of the cookies in the pantry and the ice cream in the freezer. And I confess that this is my daily ongoing battle.

I have to end with my favorite Oswald Chambers.