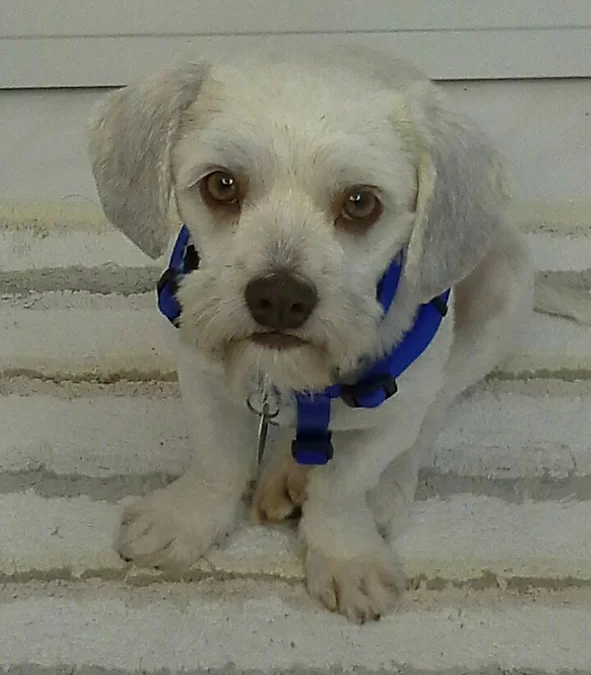 You are staring at eight bundles of canine energy with no idea of which one to pick. Suddenly one separates itself from the melee. It rolls over to display a fat pink tummy, struggles back on to four stubby legs and waddles in you direction.

You are lost. Doomed. You’ve been picked.

Been there. Many years ago. Nowadays I rescue my fur babies.  When my little Lola, all seven pounds of toothless, ancient fur (walks being taken in a stroller), finally crossed the rainbow bridge, I took to Maltese Rescue to find her replacement.

Let me not get into a rant of –

In mitigation of the above, my vet pointed out that these private rescues that have dogs in foster homes are over-whelmed.

But that didn’t help me any in finding a dog. The local shelter had nothing suitable.

I was bemoaning my lot to my groomer while picking up the lonely poodle. And what do you know but she turned her computer around so I could face the screen, points at a picture, and says, “He’s just been taken in at XYZ shelter.”

He had three strikes against him.

I volunteered to foster Gus until they could find him a home.

He went to be neutered and blood tests proved him heart worm positive.

Distraught I consulted the Captain who looked at me and said –

“Nobody is going to adopt a stray that’s heartworm negative. We are keeping him.”

In the meantime I’d been praying. I came across a note in my bible the other day where I wrote, at the time, “Lord please send me the right dog.”

The rest is history. Gus came to stay but I absolutely drew the line at calling him Gus. His little front paws are always in first position in classical ballet. When he walks he skips. And one and two and three and hop and so on.

It was no stretch of the imagination to rename him Mikhail Baryshnikov. Commonly called

Mikhail or if people get confused, Misha.

Which makes me think of another instance of being chosen: