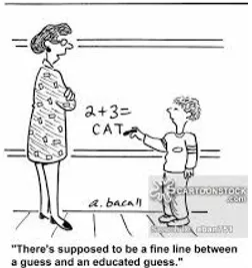 Math! The scourge of so many people. Algebra – oh please! Arithmetic – give or take 50 years ago, I used the method of counting up and taking it from there. My world consisted of the numerals 5 and 10 and if all else failed, I always had 10 fingers that never let me down; Geometry – the only that made sense remotely as I could draw something and look at it; Problem solving – Huh? But the joy, oh the joy when I did puzzle out some piece of some problem before sunrise the following day.

Enter Mrs. Grobbelaar, fondly referred to by us as Grobbie (with a hard G as if you’re gargling, please.) This hapless woman was widowed young (a farmer’s wife) and returned to teaching. She lived “in” with her 6 year old daughter in a large beautiful room with private bath. I saw nearly as much of that room as I did of my own dorm.

Enter Me. I changed schools halfway through 10th grade (standerd 8 vir my Afrikaans-sprekende lesers) and that’s another story where my hero on a white horse, aka my brother Chris, saved my rear end from serious repercussions. But there I was, in a new school with totally different subject choices. In those years you had to have Math or a third language to pursue a degree at a university.

My eyes lit up and the thought of a third language but it was not to be. Everyone in that academic stream had started Latin in Grade 8 (standerd 6) and The Powers didn’t think I could catch up. They didn’t ask me, of course. I swear I could’ve caught up, knowing the speed at which third languages were taught. I desperately wanted to learn Latin and dreaded the alternative. But there I was, facing my Nemesis once again, MATH!

Back to Mrs. Grobbelaar. There were only four of us in that Senior Math Class. You had to be very good and somehow I remember Shirley Kahn. Shirley was Jewish and would always bring us Matzos. Tall, gangly, a red head with freckles, ridiculously smart and the only “day” student (as in not in the boarding school) in a class of 28.

Whether you were smart of whether you were there by default, like me, there was no question about pursuing an advanced education, it was a given. I was going to university. (Another story there.)

What was poor Mrs. Grobbelaar to do with a student who scored A+ in other subjects but failed Math? She realized, and relied, on the fact that I had an exceptional memory so she obtained the final 12th grade Exam Questions (Standerd 10 Finale Eksamen) that had been set since 1946 and made me work through them.

Sheer memorization and thus recognizing similarities carried the day and saved my rear end. I graduated with A in Afrikaans, English, History, Music (ooh la la the stories I could tell about this!) a B in Biology and woot-woot, a D in Math. Scraping through with a few points to spare guaranteed acceptance into a university to pursue a degree.

Nowadays my complex problems come in understanding The Word. My spiritual teacher is the Holy Spirit and like Mrs. Grobbelaar many years ago, He/She (and why do we always refer to the Holy Spirit as He anyway? Spirits are spirits.) Where was I? Oh yes, He/She has to repeatedly and ad nauseum explain things to me.

I read and re-read my daily devotions; I cross-reference; I scratch my head (by the way, I’ve given up on straight hair and have embraced my aging look of a Shirley Temple mop); I make another cup of coffee and sometimes, not always, the light comes on and I’m back in 12th grade math having solved a problem. Thank you Holy Spirit!

Psalm 118:27 “Bind the sacrifice with cords to the horns of the altar.”

My sacrifice – the direction my writing has taken. The cords that bind me – my faith. My altar – my commitment to writing. I have bound my sacrifice (my writing) with cords (my faith) to my altar (commitment)

And then the fire starts. Self-doubt, tired, negative comments, little or no feedback and I have to grit my teeth to not give way to self-pity or just give up.  The ideas will come, and so will the readers. If it was meant to be.

Blessings all and Cyber Hugs. As for the following video – just because it’s such a beautiful song.